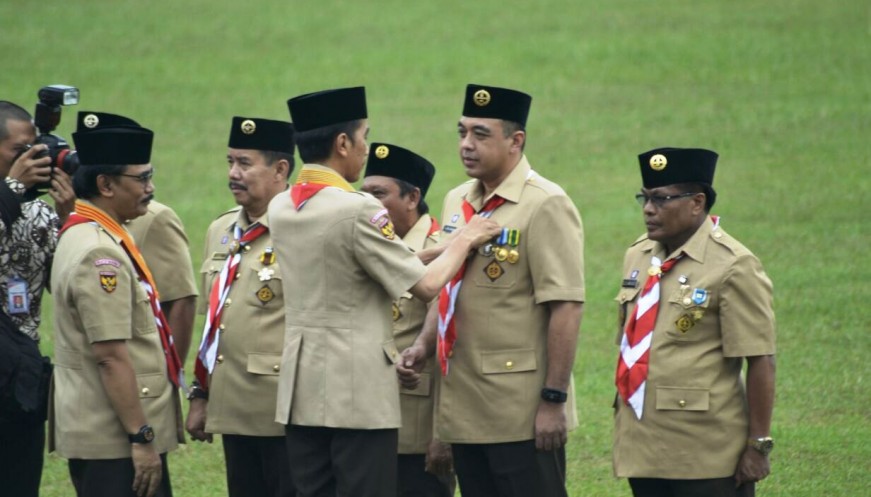 In commemoration of the 55th National Scouting Day and the opening of the 10th National Jamboree in Cibubur, East Jakarta, Tangerang regent A. Zaki Iskandar received Lencana Dharmabakti award for his consisten efforts and supports to develop the scouting movement in Tangerang regency.

The award was directly handed down by President Joko Widodo to Zaki on Sunday a part of  the opening of the National Jamboree held at camping ground in Cibubur, East Jakarta on Sudaday.

"Thanks for this award. I hope that scout members can show more existence in developing creativities and constribution to the progress of the country ahead," said Zaki after the jamboree opening ceremony.

Zaki added that the Tangerang Regency's branch kwartir scout will have a new building late this month. The building is built on a plot of land at Kitri Bakti Camping Ground in Curug district.

“The annual National Pramuka Jamboree in Cibubur is also important to build the national spirit. A solid Indonesia is not united by its vast landscape, but from the values of cross-regional brotherhood and multi-culturalism,” he said.

The National Pramuka Jamboree in Cibubur is to be held from Aug. 14 to 21.

President Joko Widodo asked all scout members from across the country to use information technology in creating scout movement messages, such as social media that can attract youth's interest not use social media for negativ purposes.

"Use social media to persuade others to join scout mevement instead of scoulding, defaming, blackmailing others as well as diseminating hatred," said the President.

About 25,000 Indonesian scouts reportedly participate in the National Scout Jamboree this year.

National Scout Headquarters chairman Adhyaksa Dault has reported the plan and preparation to organize the jamboree to President Joko Widodo.

The jamboree will be held to coincide with the 55th anniversary of the Indonesian scouting movement, according to Adhyaksa.

“Scouts will be given training courses relating to the creative economy, so that they can start their own businesses and will lose their enthusiasm for becoming civil servants,” the former youth and sports minister noted, adding that Scouts should also be able to become entrepreneurs.