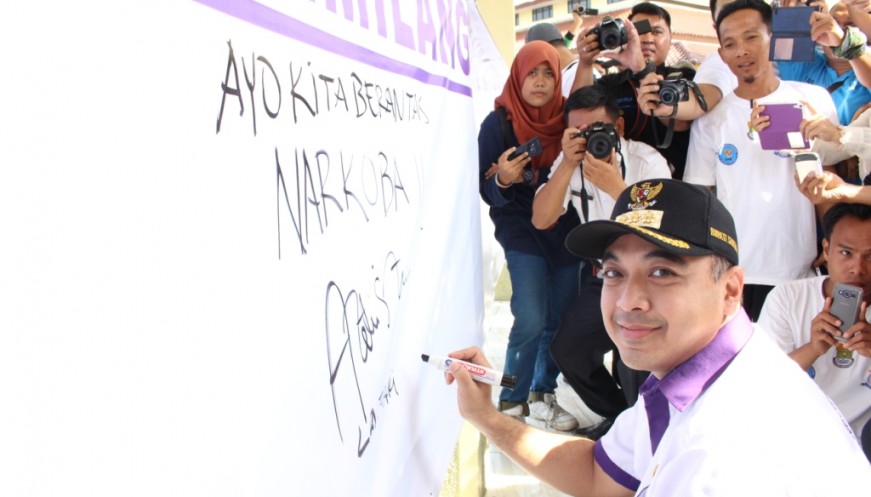 As an evidence of his strong committment to keep on fighting drugs abuse by students across the regency, Regent A. Zaki Iskandar jointly put his signature along with hundreds of school students as a means of expressing refusal of drugs on Wednesday, July 27.

Such an actvity was held after an exercise in conjuntion with the commemoration of International Anti-Drugs Day at the Maulana Yudha stadium in the regental admininstration office complex in Tigaraksa.

Backed up by the adiministration, the program was aimed at showing the administration's committment in combatting and preventing drugs abuse and illegal drug distribution as a part of the national program in anticipating drugs abuse, especially across the regency.

"Through this program, we asked school students, the younsters, and the younger generation to stay away and keep their hands off from drugs," Zaki said.

According to Zaki, since the regency is home to a number of industrial zones, it certainly needs a joint committment from all layers of community elements to fight against drugs.

The admininstration requires community's roles such as reports, suggestions and early prevention acts because they all exist among them. Therefore, students are on the front line that need early protection from drug abuses.

"We should remain on alert of drug abuses and never let drugs enter schools because students are our big hopes to continue the development here," said Zaki.

"In collaboration with the regional adminitration,regent, mayor, Military (TNI), the police and the press, we can lower drug abuse cases in the province. Most cases of drug abuses currently is dominated by crystalmethamphetamine (shabu-shabu) and social compaign on refusing drug abuse today is done as an anticipation," he said.